I have been looking forward to getting dental implants the whole time the quarantine was going on. Now that my dentist has opened up and I can finally get my consult, he is refusing to give them to me because he doesn’t think my gums are healthy enough. First, shouldn’t he have mentioned this at my checkups? Second, what do my gums have to do with any of this? Third, would a periodontist be willing to give me implants seeing as they work with gums? 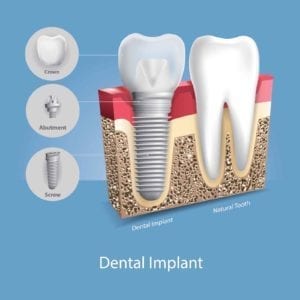 It can be quite disheartening to have something you’ve been looking forward to for a while quashed. Let’s start with your first question. Should your dentist have mentioned your gum disease at your checkups? Absolutely. While some dentists are mostly your bread and butter type of dentists who only focus on cavities, it is also important they check on other important health issues such as gum disease, teeth grinding, and oral cancer screenings. If yours isn’t, you will be better served elsewhere. Though, it is possible the gum disease is fairly new and he’s just now seeing it. If that is the case, it is actually good news. That means it will be much simpler to treat.

That leads me to your second question. What do your gums have to do with it? In reality, they have a great impact on your being a good dental implant candidate. If you look at the image I posted above, you will see that both the tooth and the dental implant have bone surrounding them. That bone is the structure that helps retain both your teeth and any dental implants. The way gum disease fits in is how it affects your bone. It begins to eat away at that bone structure and support. If your gum disease advances enough, your teeth can literally just start coming out.

Your third question, Will a periodontist give you dental implants? While I’m sure you could find both a dentist and a periodontist to give you those implants you want. The problem with that is, the dental implants will fail. You won’t even know it is because there wasn’t enough bone. They’ll still have their fee and you’re left with no teeth and no recourse. It is much better to have a dentist tell you, “Let’s fix this first.” than to just take your money and walk away to the bank laughing.

One thing a periodontist can do for you is to treat your gum disease more efficiently and get you to the point where you can actually get the dental implants you want.

My dentist said in order for me to get dental implants for my dentures I would need bone grafting. Is there any way to do that without the bone grafting? That is two surgeries. 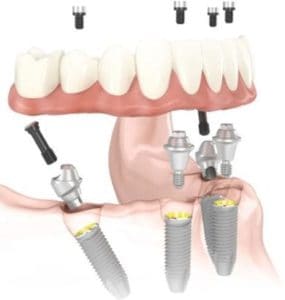 A lot of the what is possible for you depends on how much bone loss you are talking about. There is another procedure known as all-on-four dental implants (image above) which allows people with some bone loss to receive implant-supported dentures. I would go to a dentist or oral surgeon who has done that procedure many times and have the diagnostics done to see if you are a candidate. You don’t want to do go forward if you aren’t. If you do, it pretty much guarantees dental implant failure. Then you are talking about needing three surgeries in order to get the teeth you want.

If that isn’t a viable option for you, then in order to get dental implants for your dentures, you will need bone grafting done. This is because the implants serve as your teeth roots. Just like with your natural teeth, these require bone support in order to keep them in place. Without that, they will literally fall out of your mouth.

Bone grafting is a fairly easy outpatient procedure. It will be worth it if that is the only way for you to get dental implants.

Not only will you never have to worry about your dentures slipping, sliding, or falling out, it has a much bigger benefit — the prevention of facial collapse.

When your teeth were removed, your body immediately began to resorb the minerals in your jawbone to use elsewhere in your body. It does that in an effort to be as efficient as possible with your body’s resources. Unfortunately, this also slowly shrinks your jawbone. Eventually, you will not have enough bone left to even retain your dentures, making it impossible for you to eat all but the softest of foods.

Having implants in your jaw signals to your body that you still have teeth there and it leaves your jawbone in place.

This blog is brought to you by Atlanta periodontist Dr. David Pumphrey.

I had a dental implant that didn’t integrate with the bone and had to be removed. This was six months after it was placed. He told me at the time that it had perforated the sinus cavity by just a few millimeters. He didn’t think it needed any antibiotics at the time and put me on a course of Flonase instead and told me not to blow my nose The problem is it felt weird ever since then. After a couple of weeks, I insisted on an antibiotic to which he finally agreed. He wants to start over when I’ve healed but I’m not sure I trust him. Shouldn’t he have given me an antibiotic when he first removed the implant? One other question. I have a friend who has dentures and would like to switch to implants. Is that possible when she needs to replace all her teeth? My one implant was very expensive on its own.

I’m going to answer the question for your friend first simply because it is the easiest. It is very possible for your friend to replace her dentures with dental implants. Instead of replacing every tooth on a 1:1 basis, what she’ll do instead is have four to six dental implants placed and then a denture will be anchored to them. This is called implant overdentures. The only hiccup could be if she’s been in dentures for a long time.

Once her teeth were removed, her body began resorbing the minerals in her jawbone to use elsewhere in her body. This slowly shrinks her jawbone. For dental implants to remain secure, they need bone to integrate with them, as you’ve discovered with the dental implant failure you just experienced. If she’s lost a lot of bone structure, she can still get the dental implants but will require a bone grafting procedure first.

When your dental implant was first removed, if there was no sign of infection, there really wasn’t a reason to give an antibiotic. This way, if an infection develops later, the antibiotic that you do need will be completely effective. The Flonase was a good idea as well.

All that being said, I have some serious concerns about other aspects of your case that I feel need to be addressed before you move forward with this dentist. First, the perforation. Diagnostics are extremely important when it comes to placing dental implants. Did your dentist do a CT scan? Because this is a 3-dimensional procedure, it really needs 3-dimensional x-rays to prevent something like this from happening. Additionally, you said he perforated the cavity by a FEW millimeters. In dentistry, that is a huge amount. When this happens at all, I would say one millimeter might be acceptable— definitely not a few. I’d like to know how this happened.

Secondly, why didn’t the bone integrate with the implant and what are his plans to prevent that from happening again? If he can’t answer those to your satisfaction, my suggestion is you go elsewhere for a consultation before going any further.