I had a dental implant that didn’t integrate with the bone and had to be removed. This was six months after it was placed. He told me at the time that it had perforated the sinus cavity by just a few millimeters. He didn’t think it needed any antibiotics at the time and put me on a course of Flonase instead and told me not to blow my nose The problem is it felt weird ever since then. After a couple of weeks, I insisted on an antibiotic to which he finally agreed. He wants to start over when I’ve healed but I’m not sure I trust him. Shouldn’t he have given me an antibiotic when he first removed the implant? One other question. I have a friend who has dentures and would like to switch to implants. Is that possible when she needs to replace all her teeth? My one implant was very expensive on its own. 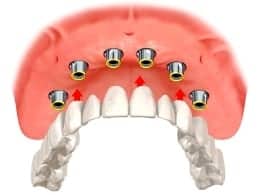 I’m going to answer the question for your friend first simply because it is the easiest. It is very possible for your friend to replace her dentures with dental implants. Instead of replacing every tooth on a 1:1 basis, what she’ll do instead is have four to six dental implants placed and then a denture will be anchored to them. This is called implant overdentures. The only hiccup could be if she’s been in dentures for a long time.

Once her teeth were removed, her body began resorbing the minerals in her jawbone to use elsewhere in her body. This slowly shrinks her jawbone. For dental implants to remain secure, they need bone to integrate with them, as you’ve discovered with the dental implant failure you just experienced. If she’s lost a lot of bone structure, she can still get the dental implants but will require a bone grafting procedure first.

When your dental implant was first removed, if there was no sign of infection, there really wasn’t a reason to give an antibiotic. This way, if an infection develops later, the antibiotic that you do need will be completely effective. The Flonase was a good idea as well.

All that being said, I have some serious concerns about other aspects of your case that I feel need to be addressed before you move forward with this dentist. First, the perforation. Diagnostics are extremely important when it comes to placing dental implants. Did your dentist do a CT scan? Because this is a 3-dimensional procedure, it really needs 3-dimensional x-rays to prevent something like this from happening. Additionally, you said he perforated the cavity by a FEW millimeters. In dentistry, that is a huge amount. When this happens at all, I would say one millimeter might be acceptable— definitely not a few. I’d like to know how this happened.

Secondly, why didn’t the bone integrate with the implant and what are his plans to prevent that from happening again? If he can’t answer those to your satisfaction, my suggestion is you go elsewhere for a consultation before going any further.