I’ve gotten two quotes from dentists who do dental implants. The second one was more expensive than the first. I asked him about the price difference. He apparently does custom abutments and the first dentist uses premade ones. I need an unbiased opinion on whether or not the custom ones are truly better and worth the price difference. I want to do the best for the procedure, but don’t want to waste money. 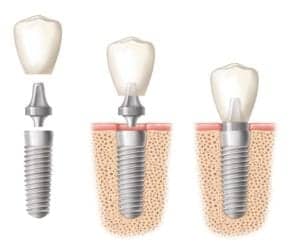 This is a great question and I’m sure other people getting dental implants will benefit from you asking. Let’s start by breaking down the parts of a dental implant. The first is the root form which is surgically placed into your jawbone. It’s designed to replace the tooth root. Next, comes the abutment. It is a type of cap that allows the crown, which is the third part, to fit properly on the root.

There are two types of abutments, as the dentists demonstrated with their preferences:

These are pre-made which is convenient for the dentist and less expensive for the patients. However, they have two disadvantages. The first being they only come in certain sizes and it may not be the best size to fit each patient. The second being that the crown will have to be cemented to the abutment. No matter how careful and skilled a dentist is, there will be some cement that leaks out. Even with the dentist removing all he or she can, some will be left causing bacteria to get trapped there.

Those are the types of things which lead to infections. Infections are the leading cause of dental implant failure.

These are made to order, designed to perfectly fit with your root and crown. Because of that, it eliminates the risks mentioned above, giving you a greater chance of a successful outcome. The only real downside is they cost more than pre-fabricated ones.

If a pre-fab abutment will fit well in your case, then go with that. However, if you’d get a better fit with a custom abutment, it is worth the additional cost to eliminate unnecessary risks.

I have a two tooth bridge on my left side and the same on my right. Originally, the left was only a one tooth bridge, but the other tooth came loose. Now, I feel the bridge loose again. I’m concerned that will mean another lost tooth. I doubt I’ll be able to get a larger bridge. He warned me losing any more teeth will mean dental implants. What I want to know is if it’s significantly cheaper to get an overdenture instead of straight implants? 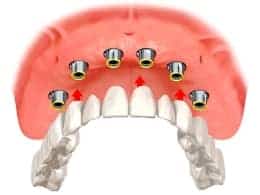 While it’s possible you are losing another tooth, it could also be a simple solution like the dental bridge just coming loose. Possibly there’s decay underneath as well. Either one of those problems is much more affordable than replacing the tooth. So, as much as you dread hearing the worst case scenario, go in soon in case it’s an easier fix. If you put it off, it will become the worst case scenario.

To answer your question, you should be aware that prices vary from dentist to dentist and from the area of the country you live. I’ll give you a low to high on everything. Just be careful not to go for the cheapest price for the sake of cheap. Getting poorly done or cheap dental implants will end up costing significantly more. It’s an advanced procedure and you want a dentist with the post-doctoral training and skill necessary to do it correctly.

A straight removable denture generally costs about $2,500. While that’s a significant monetary “savings”, the cost to your health is a lot more. You’ll be left with facial collapse in about ten or so years.

You would definitely come off better financially with the implant overdentures, without any of the downsides of dentures, which are significant.

I hope this helps.
This blog is brought to you by Atlanta Periodontist Dr. David Pumphrey.

My mom and I are in a bit of a disagreement. She’s in her upper 70s and wants to get all-on-4 dental implants. I’m worried she’s too old and being taken advantage of. She’s been complaining about her dentures for a while. I know she’s had them a long time and may just want an upgrade, but we’re talking about surgery. At her age, I think that’s dangerous. Normally, I take her to her doctor appointments, but she snuck away with a friend for this one and said the dentist told her she’s the perfect candidate. How do I know if this is true or if he’s trying to milk her for her money? 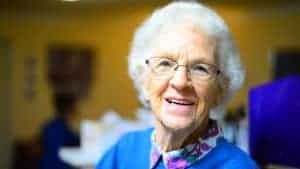 It’s obvious you care about your mother a great deal and you want to protect her. I’m going to look at this from a couple of angles.

First, let’s talk about her dentures. They’ve been bothering her for a while and you mentioned she’s had them a long time. This likely means she’s lost a lot of her jawbone structure due to facial collapse. This is a result of having dentures for as long as she has. It’s probably difficult for her to keep them from slipping. Eventually, it will become impossible having a severe impact on her ability to eat.

Dental implants prevent facial collapse; however, it does require enough bone structure to securely retain them. When a patient has lost a lot of bone, they can either have bone grafting done and then get implants, or (if they’re a candidate) they can have all-on-4 dental implants which doesn’t require as much bone.

The oldest patient on record to have dental implants was 100 years old. Filomena Battista had dental implants done in 2012, in fact, it put her in the Guinness Book of World Records. They were still in great condition at her passing in 2015. The age of a patient doesn’t matter. What does matter is the health of the patient.

If your mother is in good general health, then she is likely a good candidate for dental implants.

The more important question is who should place them. You’ll want a dentist who can do both the surgery and the restoration crown. This way there is less chance of miscommunication. Second, you want a dentist with extensive post-graduate training in dental implants. Look for someone who’s studied at the Kois Center, the Spear Institute, the Dawson Academy, or other reputable institution which teach dental implants to dentists.

Don’t hesitate to ask where they received their implant training. Also, ask how long they’ve been placing them and what their success rate is. It should be somewhere around 98%.

If all this seems in order, your mother will likely do very well. You’ll even see her quality of life improve significantly by having secure “teeth” for the first time in many years.

This blog is brought to you by Atlanta Implant Dentist Dr. David Pumphrey.