I have metal allergies and my dentist is refusing to let me get zirconia implants. His reasonings were as follows: First, according to him, no one is allergic to titanium. Second, he feels the zirconia implants do not have enough of a track record. The thing is I don’t want to do is spend a fortune and have surgery that I end up being allergic to. Is he correct? Should I just get a large dental bridge? I have to replace three teeth. 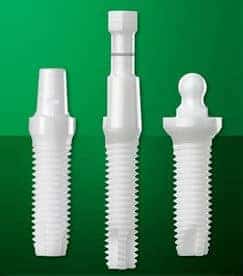 While your dentist is overstating his case, he is not being a complete liar. Don’t panic though. You can still get metal-free dental implants. I just want to go over his reasoning so you’re aware of where he’s coming from.

I don’t think your dentist can say with true certainty that no one is allergic to titanium. While it is more bio-compatible than most metals and has been used for years in surgeries such as hip replacements, there is bound to be someone allergic to it.

However, if you’re concerned, he should take that seriously. Maybe YOU ARE allergic even though he hasn’t had a patient who has been in the past. It sounds as if he’s blowing off your concerns.

The Longevity of Metal-Free Dental Implants

Here’s where he’s coming from with his second concern. Titanium implants have been in use for decades and have a proven track record. Zirconia implants are fairly new in comparison. While there isn’t the backed up evidence that they’ll last as long as traditional implants, there’s not yet evidence they won’t either.

What we do know is they’re extremely strong. Zirconia is nicknamed ceramic steel. It will not fail because of strength.

Getting Your Metal-Free Dental Implants

If you’re a good candidate for traditional dental implants, you shouldn’t have any trouble with their metal-free counterparts. That being said, you will need to see a different dentist to have them done. This one isn’t going to listen to you.

You may want to see if you can find a dentist or periodontist who has a lot of experience in placing dental implants. This will give you a better chance of a successful outcome.