I had a dental implant placed. After the crown was put on, it started to feel loose. I called my dentist and he had me come in. Once I did, he said the crown was loose and he was going to remove the crown and then bond it back on. He had a little trouble getting the crown off so he used a special tool. That’s when something went wrong because the crown came completely off. Have you heard of this happening before? 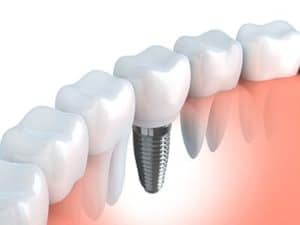 This is a whole new level of incompetence that you are facing here. When a dental crown is loose, it does not require a special tool. In most cases, they fall off on their own. He should have instantly realized it was the dental implant that was loose and not the crown. So, why did it become loose?

There are a few things that can make a dental implant fail. The first thing that comes to my mind is premature loading. This is when the dental crown is placed before the implant was integrated enough with the bone to completely support it. I could be misreading, but the way your statement sounded was this implant became loose shortly after the dental crown was placed.

Another possibility is you developed an infection at the implant site. However, that is usually accompanied by pain and fever. You didn’t mention either of those so I feel like that might not have been your issue.

A third reason could have been poor placement on the part of the dentist. In your particular case, either scenario one or three are the more likely options. Now the question is, where do you go from here?

Fixing this is going to be harder than just starting over by replacing the implant and waiting for osseointegration. When he removed the fixture, it left a gaping hole where your bone is. That has to be built back up in order for your dental implant to have a chance at retention. In order to build up that bone, you will need an additional procedure known as bone grafting, which adds to your cost.

In your place, I would not merely ask for a refund. You need to demand this dentist pay to get your implant replaced by a dentist of your choosing. This go-round, make sure you use someone who has significant post-doctoral training and experience in handling the implants.